The strip I'm working on for Zarjaz has been pushed back until next year, so I've put that on hold and switched to another strip I'm producing for the next issue of another FQP title - Something Wicked. This is their annual horror anthology, and the strip in question is set in that most excellent of eras: The Victorian.

I originally wrote the story in prose form for a short story competition, then became interested in adapting it for comics. I hit a dead end however, and in the end brought my good buddy Matthew McLaughlin onboard to help me adapt it. He's sort of made it his own, in a brilliant way of course - whilst retaining the essnece of the original tale. Without giving too much away I can reveal that it's entitled 'A Pleasing Symmetry', and should be published this Autumn (in time for BICS).

Anyways, these are some concept sketches for it. 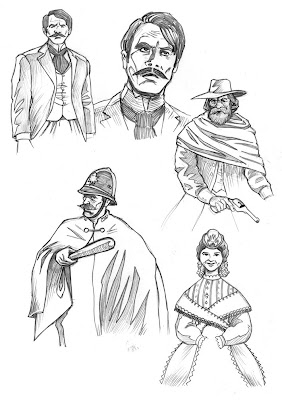