An evening in the company of Universal & Hammer horror 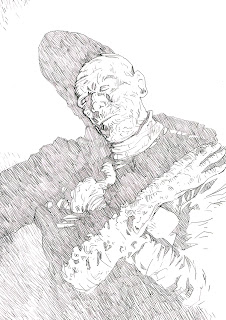 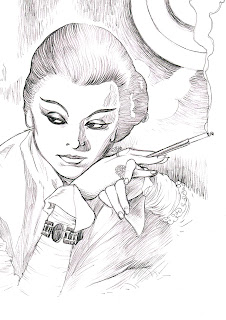 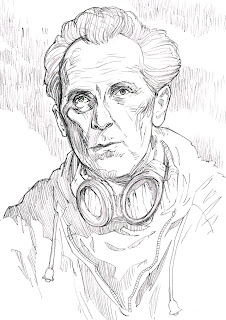 Managed to snatch a couple of hours last night to do some sketching, here's the results. From the top: Boris Karloff of course, in the 1932 version of The Mummy; Myrna Loy as Fah Lo See in The Mask of Fu Manchu (also 1932 - god, that was a good year wasn't it?); and the one and only Peter Cushing as Dr John Rollason in Hammer's 1957 production of The Abominable Snowman. Hoping to ink these up too at some point soon.
Posted by Matt Soffe at 09:34 No comments:

I'm currently engaged in the rather gargantuan task of colouring my first professional comic ('Banned Across The Universe'), but, conscious that I want to keep my hand in drawing-wise, I agreed to provide an illustration per month for The Occultists, a new podcast from writers Owen Johnson and Max Deacon. In said podcast, the guys chew the fat over cult movies, and it really is worth a listen. Owen approached me and asked if they could use my portrait of Elsa Lanchester as The Bride of Frankenstein, so I said yes of course, taking the opportunity to throw a bit of colour on it too. 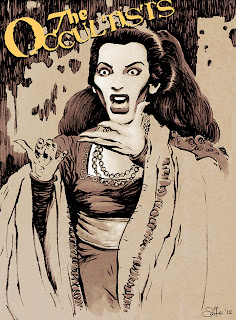 The first podcast involved a discussion of 2 movies - Michael Lehmann's blackly comic 'Heathers' (1988) and the 1969 film version of 'Medea', directed by Pasolini and featuring the only movie appearance of Maria Callas in the title role. Owen requested a sort of mash-up illustration but unfortunately due to time constraints I only got around to drawing Medea. Did have bash at a logo too though - not often I get to flex my much-atrophied typography muscles. 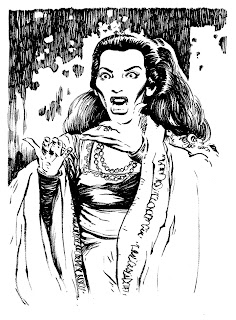 I'm looking forward to next month's already, as I get to draw Vincent Price as The Joker! 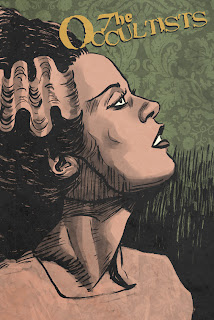